Thanks for signing up! We promise to keep you posted.

You can unsubscribe at any time if you get seasick!

Fiona and Randy Woods splashed down from the three dimensional world of professional and sport ballooning onto the shifting seas.  Their four adult children are scattered across the world, some with children of their own in tow.

Over three watery decades the Woods progressed from rowing, sailing and outboard skiffs to lobster boats, inter-island commuters, and then onto live-aboard yachts.  After ten years seasonally exploring the waters of  the Atlantic and the Great Lakes aboard their Grand Banks Eastbay, Moonshadow, the Woods accepted delivery in 2012 of Jupiter, a robust and accommodating pilothouse motor yacht.

Fiona and Randy continued to explore the Atlantic coast until the spring of 2018 when they transported Jupiter to British Columbia to begin the next adventure: navigating the inside and outside passages of Puget Sound, British Columbia and Southeast Alaska.

The Woods have cruised over 50,000 nautical miles together, and each hold US Coast Guard 100 Ton Masters credentials.  They are cross-trained on the boat’s mechanical, navigational and domestic systems, and often bicker about who will pilot Jupiter.

Fiona and Randy are members of the Explorers Club and serve in the US Coast Guard Auxiliary.

JUPITER is a 2013 Grand Banks Aleutian Raised Pilothouse Motor Yacht. She is a production fiberglass build, ordered and extensively modified by the owners to be the cruising couple’s ultimate vessel. Jupiter was built in Malaysia, commissioned in Maryland and US registered.

JUPITER is the Roman King of the Gods and the fifth planet from the Sun. Jupiter, the Bringer of Jollity, is honored in the fourth movement of Gustav Holst’s orchestral suite, The Planets. This music also provides the melody for a favorite patriotic English hymn, honoring Fiona’s British heritage.
JUPITER is easily spelled and readily understood during radio communications.

A Private Signal is a flag fashioned by the vessel’s owner as a singular identifier. Our flag is usually flown on the boat’s signal mast or at the bow pulpit

Jupiter’s Signal is the ancient astrological symbol for the planet. It is a knotty combination of several elements: the Greek letter Zeta for Zeus, the eagle and sword for authority, the cross for balance centered in the planetary orbits and other imaginings. 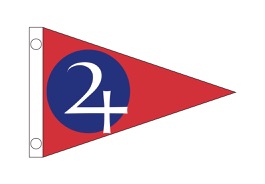 Welcome aboard! We will keep you posted.

You can unsubscribe at any time if you get seasick!